The aim of kissproject in one word - LIFE. 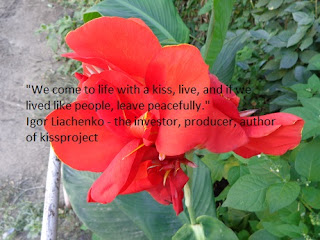 No matter what one's type of passport and amount of earnings may be, if we take a risk and open up our eyes, we will surely see that the picture of reality is far from perfect. But it turned out that at the bottom of all troubles and disasters of rich and poor Earthmen there is one cause. Although it is more comfortable to cry in one's own luxurious car than in some public transport... No matter who we are. The main primary cause must be removed quickly. If we don't want to put our fate to a test...and perhaps find ourselves among "the luckiest" who will start again from the caves in some ten years.
That is why the AIM of kissproject is in one word - to LIVE. And not to live one's last years as a rich or a poor, facing a dreadful death, cursing the day of our birth. But, having removed the root of evil quickly and peacefully, to live up to the age of some hundred years old, to live like in a fairy-tale.

And after that die in peace, leaving for our descendants a planet on which for the next million of years there will be NO poverty, NO incurable diseases, NO singles or lonely ones, NO unloved and abandoned children and parents, NO criminality, NO crisis, NO wars.

The fairy-tale is not a fantasy now - the dark side is the end for everyone, but the fire will be not with devils/frying pans, but nuclear, but the light side of the developed technologies makes it possible to build the World which will suit Everyone. The theory and the program of actions are presented in different variants. Either in one sentence or in volumes, just as you wish. And the fact that it is all serious can be proved easily - every word is under control now, nevertherless you got the program, NOT of replacing one "promiser" by the other, but about how in three steps, in five years, to build on the Earth almost a paradise, but for almost all sinners.

Our civilization reached the line where there are two variants of the future, we have known both of them from the very beginning, but we can still make the choice.
Choose, there are various versions of the project without any censorship in all senses.

As soon as we start, the evolutionary changes for the better will happen every day for everyone, and creative people and businessmen will, in a year, make their life similar to a fairy-tale. I'm not joking.

My name is Anna Kolesnikova. I partisipate in kissproject as a writer/translator. My aim is to save myself, my family, my friends and the Earth from the inevitable end. We can do this together and we can make friends with each other.

Or, if you know Russian, you may contact the author of the project - Igor Liachenko (Skype - iglalisa, e-mail - kissproject.info@gmail.com)
By Unknown